Ernest Levy was possibly the most renowned Holocaust survivor in Scotland; not only dedicated to the development of Holocaust education but a fine cantor as well as rabbi at Giffnock Synagogue for most of his life in Scotland. In Being Ernest’s Daughter, Ernest’s stepdaughter Judy Russell will reflect personally on Ernest as a man and father, on his influence on her, and on her role now as the inheritor of his work on Holocaust memory.  What was it like to grow up with someone who, despite his personal suffering in the camps, succeeded in living without bitterness?  What was it like to be the daughter of someone so well-known in Scotland and so esteemed as a human being?  How does Judy now see the future direction of his work?

Judy Russell was born in Budapest and came to the UK in 1957 with her parents and grandparents. Her father, who was seriously ill, passed away shortly after they settled in Scotland. Her mother, Kathy, also a Holocaust survivor, met Ernest in Glasgow and their friendship bond was strengthened by their similar experiences. ‘Ernest was the only father I really knew.’ Judy’s and Ernest’s father/daughter relationship grew stronger in later life. Involved in helping Ernest write his second book, the discussions of his experiences influenced Judy’s own thinking. A teacher all her working career, she was keen to share his story, and now retells Ernest’s story in schools whenever she gets the opportunity. After Ernest’s death in 2009 Judy donated much of her father’s writings, photographs and music to Edinburgh City Libraries. Judy is still actively involved in making sure that the archive is available to all who wish to use it. 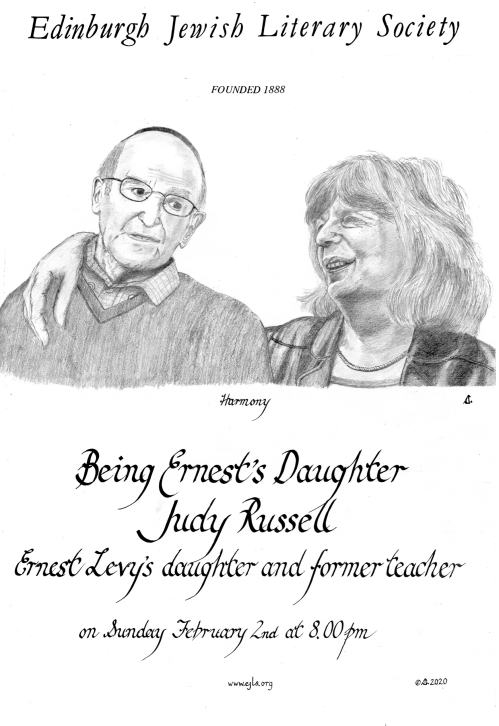