Drawing on a cache of untranslated letters and diaries in her recently-published book A Bold and Dangerous Family, Caroline Moorehead tells the story of an Italian-Jewish family from Florence – Amelia (the mother), Carlo and Neto (two of her sons) − who were prominent anti-Fascists during the inter-war period. It is an amazing story of courage and tenacity that ends in tragedy when Carlo and Neto are assassinated on Mussolini’s orders in Normandy in 1938.

Caroline Moorehead is a biographer and human rights journalist. Among her many books, she is the author of A Train in Winter, which tells the story of 230 women in the French Resistance who were sent to Auschwitz, and Village of Secrets, which tells the story of how, during the Second World War, several thousand victims of Nazi persecution were hidden in mountain villages in the Massif Central and saved from deportation and certain death through the actions of a number of heroic individuals. 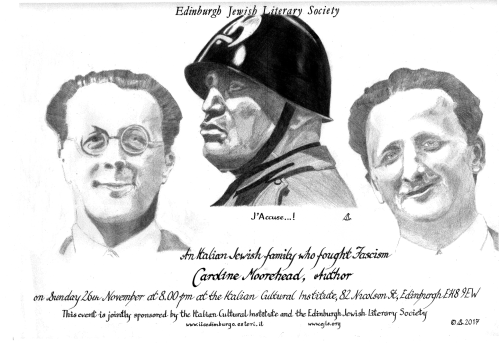