Gillian’s talk will be delivered online. Joining instructions will be sent out on the morning of 19th April via the Lit and the Sukkat Shalom mailing lists. If you do not receive Lit or Sukkat Shalom mailings, please write to ejlsoc@gmail.com by midnight on Saturday 18th April to register for this event.

This talk will take at its starting point 354 marriages, registered in Edinburgh between 1855 and 1911 where the bride or groom, or both, were Jewish. The records were assembled as part of a demographic study of 200 years of Scottish Jewry. We can  look at where they lived. their occupations, the families they came from, and those they formed. For the 271 marriages with a Jewish ceremony, we will profile some of the rabbis who officiated at them and the communities they served. During the later part of the period there were three main Jewish Communities in Edinburgh, just as there are now. The talk will look at similarities and differences between Jewish communities in Edinburgh then and now.

Gillian Raab is an applied statistician, mainly working in the medical and social fields. She is professor emeritus of Applied Statistics from Edinburgh Napier University. In her retirement she continues to work on various research projects using administrative data. She is a founder member of Sukkat Shalom, the Edinburgh Liberal Jewish Community. 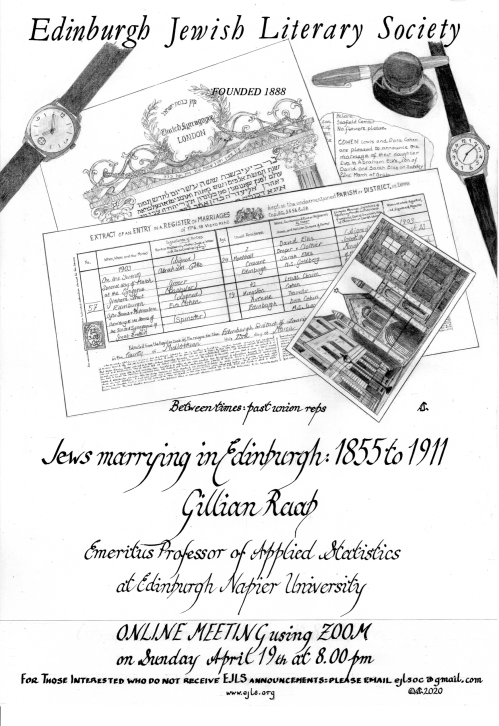